Oriole has an 11.80% interest in privately-owned Thani Stratex Djibouti Limited (‘TSD’) for its projects in Djibouti.

TSD is currently focused on the Oklila (Pandora), Hesdaba and Assaleyta licences. In November 2018, TSD signed an agreement with African Minerals Exploration & Development Fund III for the management and funding of TSD.  The first US$2.5 million tranche of the funding has been used to undertake drilling programmes at Pandora and Hesdaba and the second US$2.5 million tranche has recently been committed to support further work at Hesdaba and Assaleyta. Further tranches will be advanced subject to TSD achieving performance milestones, including resource definition and the completion of technical studies.

The 93 sq km Oklila licence includes the main Pandora epithermal vein target (comprising Pandora and Pandora South prospects) which is up to 15 metres wide at surface and can be traced over a strike length of approximately 2 km. Grades vary from 5ppb Au to 54.5g/t Au.

Located 250 metres SW of the main Pandora structure, the Pyrrha Vein has been identified over a strike length of 1.5 km. The vein is generally less than 1 m in thickness. High gold assays of up to 71.60 g/t Au at surface could indicate a potential for the presence of high gold grades at depth. Further mapping in the area has also discovered the Thyia Zone which appears to be a linkage structure between Pyrrha and Pandora. The entire system at Oklila comprises over 10 km strike of outcropping and inferred veins.

In H1-2018, TSD completed Phase 2 drilling for 3,036.5 m in 18 holes. The aim of this drilling was to test the depth-extension of previously drilled mineralisation and identify potential higher-grade ore shoots within the system that could lead to the definition of a resource. Results demonstrated broad zones of multi-gram gold mineralisation towards the NW-end of the main Pandora vein, as well as narrower zones of higher-grade mineralisation. Best results (recalculated by the Company using a 0.2 g/t Au cut-off) include:

Importantly, hole OK-D-32 was drilled to intersect the WNW-oriented Pyrrha vein, which appears to be part of the same structurally-controlled vein system as the Pandora vein, and returned 55.4 g/t Au over 1.22m from approximately 32m below surface (based on -50° drill hole inclination). Review of the satellite imagery suggests a series of structural offsets (a sign of strain accommodation) in the zone between the main Pandora and Pyrrha structures, that are likely to have created enhanced zones of dilation and gold deposition.

More recently, a Phase 3 drilling programme was completed for 1,242 m in Q1-2020. Results from the 13-hole programme support those yielded from the previous drilling phases, with the best intersections yielded at the north-western end of main Pandora prospect and at the south-eastern end of Pyrrha prospect. Best results (recalculated by the Company using a 0.3 g/t Au cut-off) include:

Mineralisation is predominantly related to quartz vein and hydrothermal silica breccia, with associated demagnetisation of the basalt host rocks. Highest grades are related to the presence of sulphide-rich chalcedonic silica, as shown in the following two cross-sections (modified after TSD to show intersections at 0.3 g/t Au cut-off).

TSD has advised that it will complete a full review of data from its projects in Djibouti ahead of planning any follow-up programmes.

At the recently-acquired Hesdaba project, 10 km northwest of Pandora, TSD has completed detailed mapping that has identified veins over a combined strike of 16 km. A Phase 1 drilling programme comprising 1,931 m of diamond drilling (14 holes) and 1,529 m of RC drilling (15 holes) was recently completed to test the epithermal system at depth across three primary targets: Maranzana, Caravan and Red Horns. Results for an inital 478 core samples and 1,129 RC samples (inclusive of QAQC) have confirmed significant mineralisation at all three targets, with best results including: 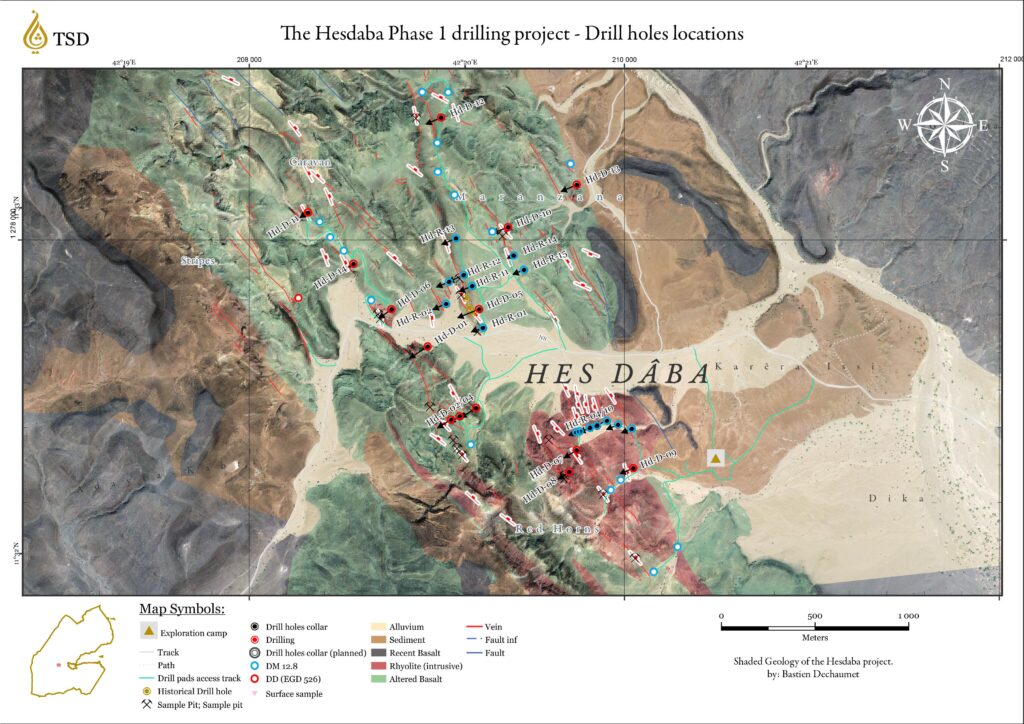 As at Pandora, mineralisation is predominantly related to quartz veins and hydrothermal silica breccia, with classic epithermal textures observed in all holes. Further results from this programme are anticipated in Q4-2020.

Having completed an initial US$2.5 million investment in Djibouti, AMED Fund III has now committed to the next tranche of funding. During the Tranche 2 investment period, TSD plans to complete a further 2,500m RC drilling at Hesdaba, commencing in Q4-2020. TSD also plans to undertake camp construction at the nearby Assaleyta project and will subsequently complete a Phase 2 drilling programme comprising 2,000 m diamond drilling and 2,000 m RC drilling, to follow-up on the maiden results there. The Company looks forward to providing updates in due course.

Camp construction, major road and drill access works, and 2,000 m Phase 2 diamond drilling programme were originally planned for H2-2020. However, as a result of COVID-19, further work at this project is on hold until further notice.